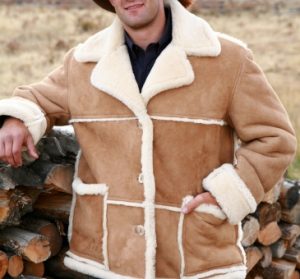 The highly-anticipated biographical musical about the life of music legend Carole King has finally made its debut on Broadway, and so has our Men’s Sheepskin Riding Jacket, worn by both the lead actor in “Beautiful: The Carole King Musical” and his understudy. The lighthearted bio-musical opened on Broadway on January 12, 2014 at the Stephen Sondheim Theatre in New York City, and brought such A-list celebrities like Nathan Lane, Phil Collins and Clive Davis under the same roof on the East coast, while the majority of the entertainment industry gathered in Hollywood for the Golden Globes. We are proud to say that those high-profile names in music, and anyone else lucky enough to see “Beautiful” on Broadway in the coming months, will catch a glimpse of our handmade sheepskin jacket for men, worn by lead actor Jake Epstein.

About “Beautiful: The Carole King Musical”

“Beautiful: The Carole King Musical” tells the inspiring true story of Carole King fighting her way into the music business as a teenager, marrying the man of her dreams (Gerry Goffin), crafting a successful career writing hit songs for the biggest names in rock and roll, and then finally finding her true voice only as her personal life begins to fall apart. The Broadway musical stars Jessie Mueller as Carole King (known as Carol Klein during her teenage years) and Jake Epstein as Gerry Goffin – two parts of a hit songwriting team credited with “writing the soundtrack to a generation” in the early 1960s, before King became a successful solo singer-songwriter by her own right in the 70s.

Gerry Goffin, played by Jake Epstein was a notoriously troubled lyricist born in 1939 and inducted into the Rock and Roll Hall of Fame in 1990, along with his first wife and former songwriting partner, Carole King. King and Goffin were married in 1959 – when she was 17 and he was 20 – and the power duo went on to pursue a wildly successful songwriting career with breakthrough hits like “Will You Love Me Tomorrow” and “Pleasant Valley Sunday,” before divorcing in 1968. Mueller has been widely praised by critics for her portrayal of Carole King and lead actor Jake Epstein also does a brilliant job of playing Gerry Goffin…and he looks great in our men’s sheepskin jacket too!

Genuine Sheepskin Jackets at The Sheepherder

The Sheepherder shearling coat featured in the Broadway musical “Beautiful” is our men’s riding jacket, a shorter length coat with wool-trimmed seams and attractive patch pockets. The handsome and versatile sheepskin jacket boasts a beautiful wool notched collar and three-inch roll cuffs guaranteed to offer protection from even the coldest and windiest weather. All of our shearling coats for men at The Sheepherder are custom-made to fit, which is why “Beautiful” required different jackets for Epstein and his understudy, and are crafted right here in the United States using the skins of domestic sheep raised in the Rocky Mountain states. Because they are made with genuine sheepskin, all of our shearling jackets for women and men are incredibly comfortable and durable, and naturally wick away moisture from the skin, keeping you cool in the summer and warm in the winter.