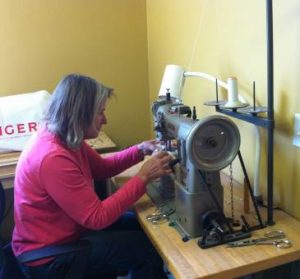 The Sheepherder and its owner Diane Blessing are recognized as a staple in Alma, Colorado, but the custom sheepskin shop didn’t always call 112 North Main Street home. When The Sheepherder first opened, it was located in Breckenridge, Colorado, and Diane began working at the shop in 1978. When the business was sold in 1980, Diane decided to stay on and work for the new owners, using her carefully honed skills to create beautiful handmade sheepskin slippers, jackets and more. Less than ten years later, her decision paid off, and in 1989, with the help of a generous aunt and uncle, Diane bought the business she had invested so much of her time and energy in, building what is known today as one of the best sheepskin shops in Colorado.
Today, Diane creates custom-made sheepskin garments for a variety of customers around the world, from the United States to the UK, Germany and beyond, and her craftsmanship is second to none. In fact, Diane’s Sheepskin Riding Jacket for Men has even made an appearance on Broadway, thanks to the keen eye of a costume designer involved in “Beautiful: The Carole King Musical,” who ordered a custom sheepskin jacket each for the lead actor and his understudy. What makes The Sheepherder so special though, is that each and every shearling item – from the jackets to the vests, mittens and accessories – is handcrafted with the same attention to detail as if it would be appearing on Broadway in front of thousands of people.
Since moving from Breckenridge in 2001, the Sheepherder store has been located in downtown Alma, a scenic town nestled in the Rocky Mountains of Western Colorado, which you’ll hit just before you head over the Hoosier Pass towards the Breckenridge Ski Area. If you stop by the shop, you can see Diane herself crafting the handmade shearling garments The Sheepherder is famous for, and you’ll witness firsthand what close attention she pays to quality and detail when fulfilling custom orders for customers across the globe. If you don’t have the the opportunity to visit the shop in person, check out The Sheepherder website, where you can find a wide selection of handcrafted sheepskin garments custom made to order.
It has been a whirlwind 25 years since Diane took over The Sheepherder in 1989, and the business remains incredibly successful, in large part because Diane still has the same passion for creating custom sheepskin garments as she did when she first began working at the shop more than 30 years ago. Help celebrate our 36 years in business by purchasing a handcrafted shearling jacket or a cozy pair of sheepskin slippers from The Sheepherder today!